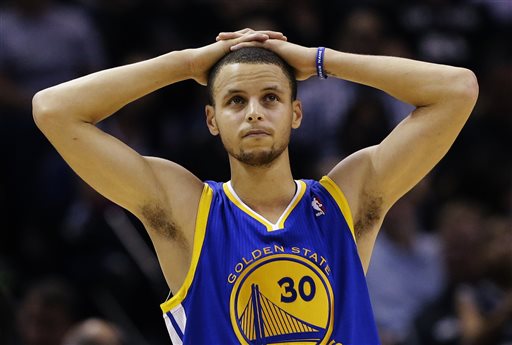 I wanted to break down exactly how and why San Antonio took over this series, but it’s a duller story than how Golden State briefly came alive at the beginning. Explaining why the Warriors are good is like unveiling a sudden mystery. Exciting! Explaining why the Spurs are good is merely to repeat what’s been said for nearly two decades. Moderately less exciting! The hope is that I can explain some of what’s happening here along with explaining what Golden State needs to do to win future series. I mean next year. This one is all but over.

San Antonio came into this series with a stingy perimeter defense. At the beginning, the combination of Parker guarding Curry and Duncan hanging too far back on high screens, helped Curry spring loose for a massive third quarter. Klay Thompson took over in the next game and dropped bombs on Manu Ginobili’s head.

Great perimeter defense be damned, maybe this just wasn’t San Antonio’s matchup. Maybe the atypical Warriors were just the right team to crack San Antonio because Curry could fire 3s off the dribble and Klay Thompson didn’t need much daylight to sling. Turns out, the Spurs are fine and the Warriors are on the brink of death.

I was amused to find the Warriors cast into the “young, athletic team overwhelming creaky Spurs” narrative for a minute. Warriors aren’t the Thunder, people. The “young” part was correct, but the “athletic” part wasn’t. Harrison Barnes is the only guy on Golden State who can jump, and he flies less often than John Madden. The Warriors are carried by crafty sets and good execution.

I’m sure San Antonio fans would be loath to admit this, but the Warriors are a bit like Spurs Lite. Both teams shoot 3s splendidly, but lack the athleticism to draw fouls. David Lee plays a bit like current Tim Duncan on offense. Andrew Bogut plays a bit like Tim Duncan on defense. The Spurs have Danny Green. The Warriors have Klay Thompson. The Warriors have Harrison Barnes. The Spurs have Kawhi Leonard. Jarrett Jack is no Manu Ginobili, but he plays a similar role off the bench. Curry and Parker go about their point guard duties differently, but the final production is similar. The Spurs love Hawk angle pick and roll. So do the Warriors.

This brings us back to three-point defense. The Spurs were good at it all year, and the Warriors were bad at it. That’s a major difference between these two teams, and the series is finally starting to reflect this chasm.

Now, Kawhi Leonard tends to guard Klay Thompson, Danny Green tends to guard Steph Curry, and Tony Parker (or whichever little guy replaces him) often “hides” on Harrison Barnes. When Parker isn’t hiding, he’s guarding a guy who only vaguely resembles Steph Curry. With the way Steph is moving, it might as well be Dell Curry out there.

The result is that San Antonio is squeezing Golden State’s 3-point attempts out of the offense. The Warriors are still shooting well when they take these attempts; The attempts just rarely appear. GSW is averaging 3.1 fewer 3-point attempts than they hoisted last series against the Nuggets. Stephen Curry is usually the guy who can create 3s from nothing, but the mix of Danny Green defense and swollen ankle pulp has compromised that quality. Kawhi has erased Klay to the degree where Thompson didn’t even try a 3 on Tuesday night.

Also, the Warriors have shifted to “bigger” lineups than the ones they used against Denver to match against San Antonio’s bigger frontcourt. Versus the Nuggets, the Jack-Curry-Thompson-Barnes-Bogut lineup got the most burn of any combo. In this series, Curry-Thompson-Barnes-Landry-Bogut has seen the most action. As a result, there’s one fewer 3-point shooter on the floor, and also, less space for the shooters who are on the floor.

The guys on the TNT set love Klay Thompson and who can blame them? He has a perfect 3-point stroke and a fast developing defensive rep. But the Inside crew doesn’t see Klay every night and they likely aren’t perpetually frustrated by his flaws. With Curry hobbled and shooting horribly, the Warriors could have used Thompson’s presence. The problem is that Thompson is such a limited player on offense.

Most premier three-point shooters are at the very least, efficient scorers. Klay gets around this with an unholy combo of poor handles, blind court vision, and terrible layup skills. Below, I’ve captured the archetypal bad Klay Thompson possession. Somehow, he ignores a wide open Curry, one pass away. After that, he isolates on Kawhi Leonard, a defender on whom he claims no advantage. A slow dribble then trudges Klay towards the hoop where he fires ball-off-backboard as though engaged in a line rebounding drill.

This isn’t meant to be a declaration of Klay’s suckitude. I like Thompson, and believe he has a lot of potential as a “3 and D” roster building block. I’m merely pointing out that these are the obstacles between what many see in Klay Thompson and where he is right now. The decision-making could stand to improve. Also, he could stand to garner more free throws off that shot fake. Over the past four games, Thompson hasn’t attempted a single free throw. Considering that he averaged 43.8 minutes over that span, this is an almost incredible feat. It’s further compounded by how Thompson shot 36% at the rim over those four games. It’s hard to be an efficient player when you rarely get easy buckets or find them for teammates.

San Antonio’s offense has started moving the ball again, creating open three-point shots all over. Curry has been slow to contest and it’s not like he has the length to scare Danny Green on catch-and-shoots. Harrison Barnes has overhelped on occasion, generating openings. The most frustrating, though, is Jarrett Jack’s ability to get screened in whichever precise way the opposing team would prefer. The Spurs are experts at employing drift screens to spring a guy racing towards the corner 3 area. Check out how Jarrett Jack gets stuck on Boris Diaw’s belly in this brilliant Manu Ginobili pass to the corner 3:

To be fair to Jack, he’s been an offensive force these past 2 games. I don’t believe the Warriors should re-sign him, but some other team should. He’s a great guy to have around in a lot of other offenses. It’s just that the gradual ramping up of Curry’s role made Jack an awkward fit. It’s no surprise to see Jarrett killing it now that Curry’s less effective. Jarrett Jack’s job shouldn’t be to find shooters on opposite sides of the court–he lacks the peripheral vision for that. Instead, his job should be running pick and roll and scoring as he pleases. The sputtering Warriors offense currently doesn’t mind his illogical decisions.

Kawhi So Serious is the Best

It should also be noted in this space that Kawhi Leonard’s been the best player of this series. Tony Parker’s been awesome at times, and especially so in Game 5, but Kawhi’s versatility and efficiency have been crucial. At 14.4 points, 9 rebounds, 62.4% True Shooting, and shut down defense on Klay Thompson, Kawhi Leonard is a certifiable Warrior killer. With Tim Duncan struggling, Leonard picked up the slack as his team’s best two-way player over the past few games.

Barnes will never rebound like Kawhi does, but he can become a more versatile scorer. I still wish he would drive more and pull-up less, but the kid is growing and will make mistakes. Even if the Spurs want him shooting, Barnes deserves credit for making them pay in Game 5. Had Stephen Curry been himself, had Andrew Bogut been himself, GSW might have had something on Tuesday night. Perhaps more importantly, they might have something in Barnes in the coming years. If ever Golden State makes the playoffs again, I want Harrison Barnes to be the starting power forward again–even if David Lee is fully healthy.