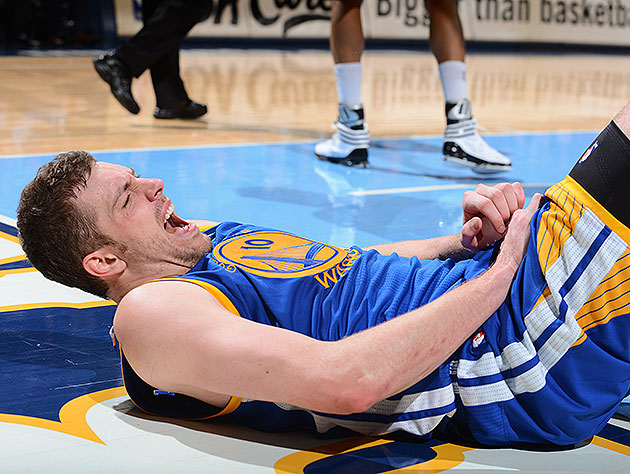 David Lee is out for the playoffs with a torn right hip flexor. This brings doom, gloom, and a potential 4-game broom.

In a vacuum, the injury is awful news for an already thin team. There is opportunity in destruction, however. Something may be gained by GSW resorting to guerilla tactics.

Mark Jackson has been averse to using a small frontcourt. I don’t have many criticisms of Jackson, but this is one of them. On account of his size and athleticism, Harrison Barnes should be a prototypical stretch four. That hasn’t happened yet, even though the Warriors might reap rewards from spreading the floor with four three-point shooters.

Not only can Barnes help Golden State’s offense by allowing it to stretch the opposing D, but such a strategy can help Barnes individually. The rookie is an explosive leaper, though his first step is slow. If GSW operates with more space, that should spring Barnes for layups and dunks. The four-out (four three-point shooters) often makes the average player look magnificent, as guys tend to flourish with more space.

The key would be playing Harrison alongside Andrew Bogut, so the Warriors can compensate for a small power forward with Bogut’s shotblocking and board work. That’s a lot of pressure to put on the big fella, but he might benefit from playing next to a faster defender. The small forward slot can be filled by Klay Thompson whenever Jarrett Jack is in the game.

It’s far from an ideal solution, as Barnes is a rookie, and not quite used to playing power forward. But desperate times call for desperate measures. The Warriors are not going to win this series by merely being less of themselves. They must shake the snow globe up, change the terrain. It’s not enough for everyone to “step up” in David Lee’s absence. The Warriors must wholly alter their offensive constitution. To avoid going out in four, Golden State must go four-out.