Home
Around the NBA 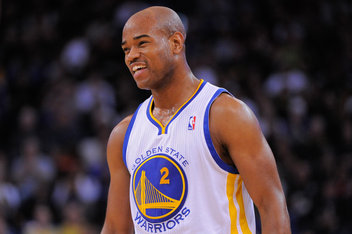 Let’s talk about how this roster has much to flaunt, in honor of this now viral Monta Ellis video where he compares himself favorably to Dwyane Wade:

“Monta Ellis have it all” is a great motto for life, if not fine slogan for GSW’s gestalt in his absence. The Warriors may not be “deep” in the traditional sense of sporting a complete bench, but they boast a guard and a big who play better than most starters. That, combined with the Lee-Curry pick-and-roll, an improved defense, and floor-stretching shooters is your basis for why the Warriors are suddenly good.

Jarrett Jack has been incredible of late, and he was much better than “14 points, four assists” against the Celtics might lead you to believe. When Boston was staging a late comeback, Jack self-assuredly steered the team towards a safe spot for cruise control.  GSW’s unlikely crunchtime boss assisted an open Charles Jenkins jumper, hit a floater, hit a three, and assisted another open Jenkins jumper. Game over, essentially.

None of these plays were remarkable, save for how complete Jarrett Jack’s command of the game has seemed at times this season. It appears almost like Jack has basketball figured out, like he perceives the correct decision amid the noise and scrum. And it wouldn’t feel entirely abnormal to watch Chris Paul exhibit such effortlessly smart offense, but this is a bench player we’re talking about. Speaking of CP3, I asked Jack whether playing with Paul helped Jarrett develop into the player we’re seeing. Jarrett cut me off:

I must say, I was surprised. Since I don’t want to engage in LOL Journalism where we take simple honestly as something to hysterically dramatize, let me just say: I had an idea for how Jack might have improved, and he corrected me on the notion. If Chris Paul wasn’t big for JJack’s development, then he wasn’t. Players shouldn’t feel compelled to lie to us, just because it seems polite or fits the narrative we’re fishing for.

Jarrett Jack believes his improvement to have come from within. His work ethic. His talent. And, right now, I have little reason to doubt his opinion, even if his response was quick and unconventional. Chalk it up to the confidence that allows him to be a human offense when his team most needs it.

Starting point guard Stephen Curry didn’t have a half-bad game against the Celtics, either, going four-of-five on some deep threes. If it seems as though Steph Curry gets more deadly the farther he gets from the rim, that’s because it’s been so this season. Going into this game, Curry’s eFG% splits were 37% at 5-9 feet, 51.5% at 20-24 feet, 66% at 25-29 feet, and 75% at 30-34 feet. After the game, I asked Steph Curry about the possibility of taking some 40 feet Gilbert Arenas shots. He’s not sold on it, or at least, not as sold on it as I’m increasingly becoming sold on this Warriors team.