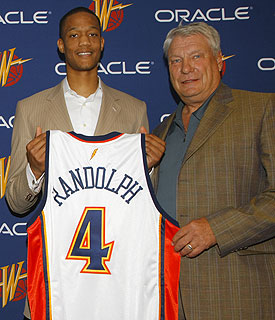 SS: Okay, first email. Doesn’t it feel as though we have our own parallel LeBron drama? Only no one, with the exception of Knicks and Warriors fans, even cares? Oakland and Cleveland are connected right now, like miserable siamese twins. It’s a dreary kind of excitement. How are you facing our awful fate? Grim acceptance? Rage? Humor?

AL: I’m sure LeBron would be happy to know that the Warriors’ basketball universe does, in fact, revolve around him.  I’m a bit surprised Rowell hasn’t circulated rumors about his last minute offers to LeBron — stories about how Riley was this close to working out a deal, a la Arenas and Brand.  This is typical Warriors’ drama.  We’re not in the running for the difference maker, we’re sitting on pins and needles for the opportunity to trade away our most promising big man prospect in 15 years for an $80 million guy that lead his team to 29 and 32 wins the last two years.  On the dreary excitement meter, this falls for me somewhere between watching cars hit the wall at Daytona and horses pull up lame at the Derby.  It’s a spectacle — people ooh and ahh, then get a sinking feeling in their stomachs.

So how am I facing this?  Not very well.  For the 15 minutes we have left before LeBron’s announcement, I’m still in denial.  Maybe James goes to NYC.  Maybe Lee gets a better offer from someone.  It wouldn’t be the first time the Warriors were used for leverage.  Assuming the worst case scenario, I expect a fair mix of grim acceptance, rage and the nihilistic humor that the Cohan era has allowed us all to perfect.  We’re the worst defensive team in the NBA trading away our best guard, forward and center defenders — all for a front office and coach that (basketball gods willing) will be gone my Labor Day.  It’s deficit spending on pork projects by a lame-duck administration.

SS: Well, looks like it’s official. My stomach is sinking, sinking out my ass. David Lee. 80 million dollars. Anthony Randolph, out of town. I don’t even hate Lee and I think this deal is rotting, rancid, burning garbage. Azubuike is on an expiring deal, Turiaf expires the year after, and of course, Randolph on a rookie contract. All this is getting tossed into the Lee wood chipper? For God sakes why? Especially when the new Randolph replacement (Udoh, who I believe will turn bust) is already injured.

That some basketball writers are ambivalent about this deal is truly incredible to me. Teams simply do not dump promising draft picks in this manner. Yes, it’s true to Cohan form in a way that’s almost a caricature of how business is done here. It’s still worth getting angry over, no one can tell me otherwise. The Warriors are exchanging minimal salary for the privilege to pay David Lee 80 million, and they still have this whole Monta-Curry problem. And they somehow managed to get much worse at defense overnight. How would you have felt about a Monta for Lee deal? Biedrins? I could have dealt with those possibilities, maybe even liked them. This is a future-robbing disaster.

The implications make me shudder. Why is this happening if a sale is indeed going through? I like the pork project deficit spending analog, I’ll try my own. It’s like an incompetent country feverishly printing more cash in a desperate attempt to fix its tanking economy.

And for a moment, LBJ was the “center of the Warriors basketball universe.” The dark comedy is that he was the center for the wrong reasons. We don’t live in a world where LeBron contemplates joining the Warriors, we live in a hell where an unlikely LeBron choice can indirectly save Warriors HQ from their stubborn idiocy. A subplot, or principle plot, depending on perspective, is that LeBron’s choice screws the league up. I can’t even fathom what move could propel the Warriors to contender status now. James, Wade and Bosh are on the same team. Yet another reason to lose interest. Are we at all happy about Lee, Adam?

On the upside, your decision to un-renew those season tickets looks sterling right now.

AL: There was an inevitability to this trade.  Within ten games of watching Randolph, you could tell he was likely heading for a run-in with Don Nelson.  He was brash, aggressive and an all-eyes-on-me presence on the court.  Nelson has never succeeded for long with those types of players.  When Mullin dropped out of the picture, they lost a key buffer layer between two big personalities.  We’re probably lucky Randolph made it two years, although his injury early last season likely postponed his trip out of town.  Lee, on the other hand, is classic Nelson.  An underdog — late first-round pick, undersized, less-than-jaw-dropping athletically.  He’ll play his role in the system without complaint, work hard, and go about his business.  But from the 10-15 games I’ve watched him, he doesn’t have that spark capable of igniting a team like Randolph (and Baron Davis, and even Stephen Jackson) did.
Since I’ve been dealing with my emotional attachment to the departing players, I haven’t even really come to terms with the salary aspect yet.  You raise a good point, however, about how this deal changes if it’s Ellis or Biedrins.  Not only does it lessen the long-term cap hit of the deal, it makes the team easier to sort out in terms of talent.  Like you said, we’ve become a lot less flexible from a cap perspective without solving any of our underlying roster-balance issues.  If anything, by losing our best three defenders, we’ve made those roster issues worse.  When guards blow past Curry and Ellis on the perimeter, we now have two fewer options to stop them at the rim.  David Lee’s defensive rebounding only matters if opponents miss.

As for upside, here’s my best shot — with some decent cap management and strategic vision over the next year, Lee could be a good piece of a playoff team.  But only a piece.  If Nelson goes in favor of a coach that gives a damn about defense, the team turns it’s expiring deals into an All-Star level player (or let’s them expire and signs one outright) and Curry continues to develop, this squad could gel into something resembling a real basketball team.  Lee is a professional, a hard worker and a specialist (rebounding).  He’s an ideal number 2 or 3 guy next to a superstar.  But the Warriors are still looking for that superstar.  Until they find him, Lee’s contribution to this team will be similar to all the other good-players-on-bad-teams we’ve witnessed (Jamison, Arenas, Richardson, Harrington, Jackson, Ellis).  The front office can hype him for player-of-the-week award, gush over his league-leading rebounding statistics and cold call people about All Star appearances, but he’s not the guy that’s going to get us basketball games in May.

Your contrast to the James situation is right on.  We saw three concepts for how to build a winning basketball team on Thursday.  The Heat cleared the decks of salary, worked their off-the-court factors (Florida’s tax laws, Pat Riley’s still-stunning hair), and executed a high-risk/high-reward gamble.  The Knicks attempted the same thing, lost out on the grand prize, but ended up with a decent consolation package (they finished with a better record than us last season — and just added Stoudemire, Randolph, Turiaf and Azubuike).  The difference between those two teams and the Warriors?  They had plans, they accepted that those plans involved risk, and they followed them for more than two months at a time.  The Warriors just seem to drift from press release to press release, spouting off different justifications to suit whatever situation they back into (We need beef!  We’re building around our young core!  We need veterans!  Raja Bell is the answer!  Raja who?  Expiring contracts don’t matter!  We’re too capped out to make a move!  Our D-Leaguers are better than second round picks!  Our D-Leaguers are entirely replaceable!).  The Warriors are what’s left when you cobble together the debris from other team’s rebuilding plans.  When the mansion next door tears out the kitchen and upgrades appliances, we get last year’s model, we pay this year’s prices, and we’re excited about it.

But yes, on the bright side, I have rarely felt so good about a decision as my one not to re-up on tickets until Cohan sells.  Thanks, Chris Cohan, Robert Rowell, Larry Riley and Don Nelson, on making the (temporary) abandonment of something I love such a relatively pain and doubt-free process.